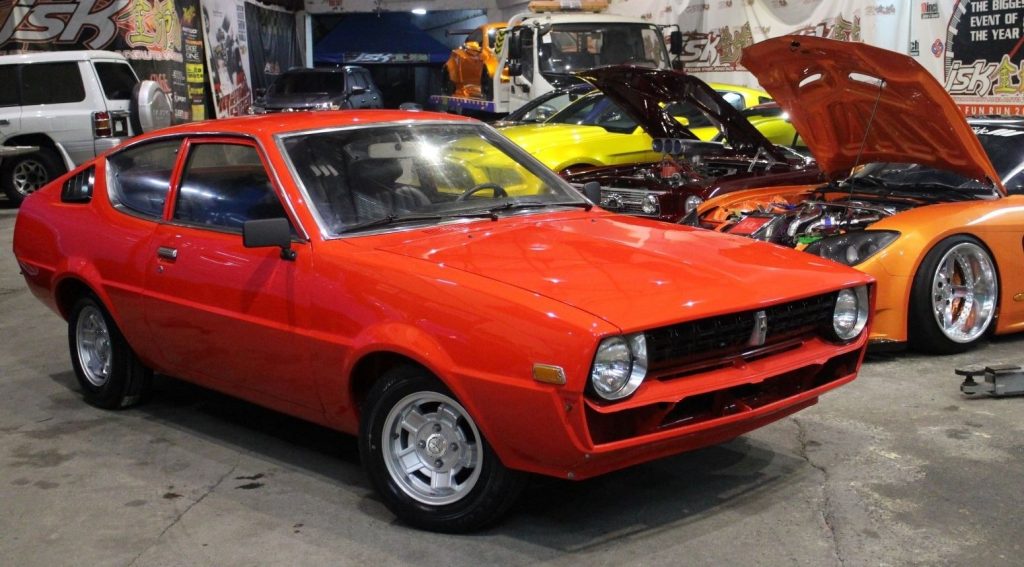 The work on our Power Wheels Magazine Project Car, the 1976 Mitsubishi Celeste 1600ST is almost complete. Owned since new by ROPALI Chairman Roberto “Bob” P. Alingog and commissioned for restoration by his son, Aldous Rex Alingog, the Celeste was recently fitted with a brand-new set of Bridgestone Ecopia EP-150 tires – 175/70R13s in front and 185/70R13s at the back – that were mounted on the newly refurbished original PAWI 13-inch alloy wheels. 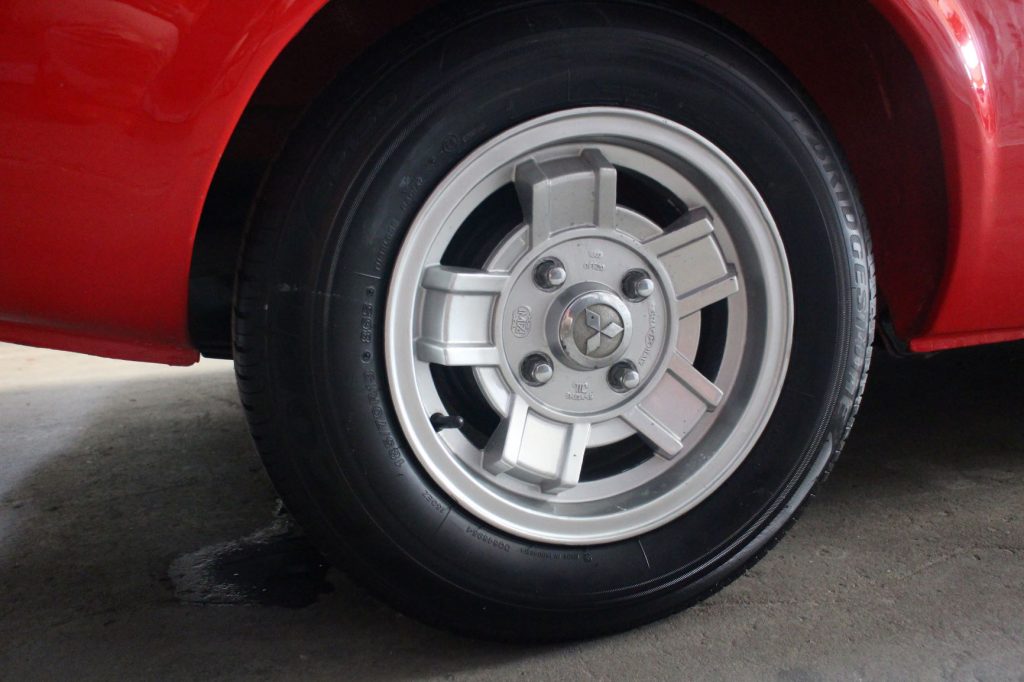 Meanwhile, the technicians from JSK Custom Paint and Auto Works continue to work on the finishing touches to complete the car’s restoration. However, we still have to find and install a couple of minor mechanical parts and trim pieces and work on a few minor problems to finish our project car. For example, we realized that the newly-installed power steering hydraulic pump and reservoir (upper yellow arrow in the photo below) will require a repositioning of the air cleaner assembly, which will also require an extension hose or pipe to connect the original hose to the cold air/ram air opening in the radiator support (lower yellow arrow). 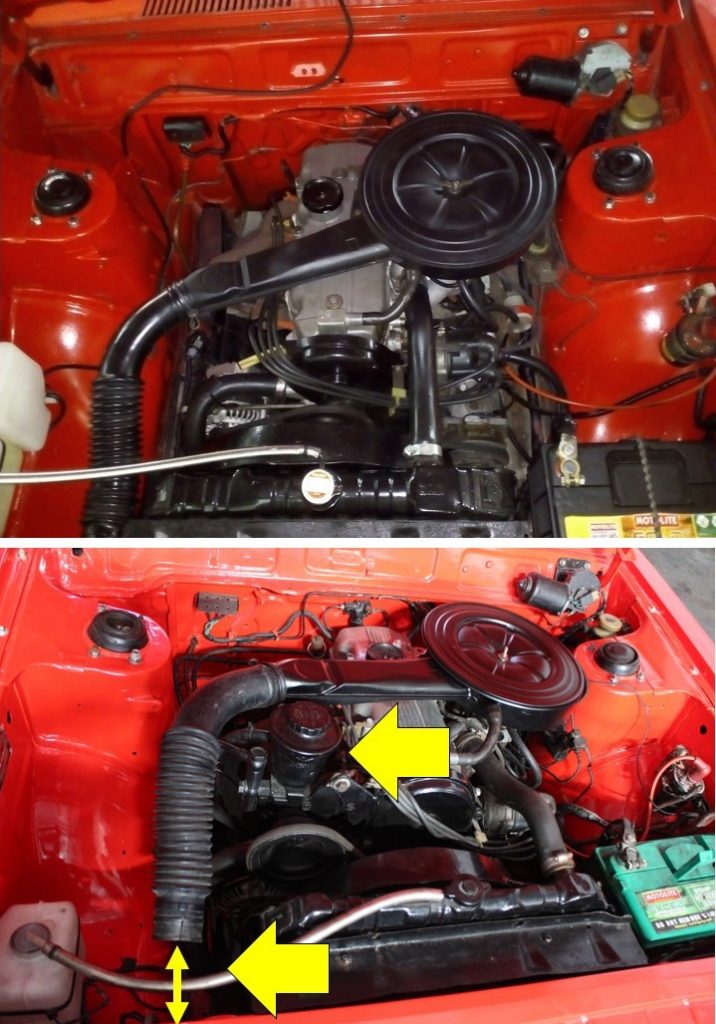 Since this red Celeste will be a loving gift from a son (Aldous) to his father (Bob), Johnson Tan, the proprietor of JSK Custom Paint and Auto Works, wanted to add something more to the restoration work  that has been done by his shop. “My father bought me a Ford Cortina in the late ’70s because he knew that I love cars”, recalled Johnson. “As a tribute to my late father, I took on a long-term restoration of his first car, a 1968 Austin A60 Cambridge wagon, that I’m still working on slowly when the shop is not too busy.” 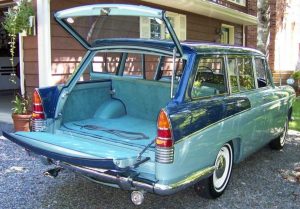 “Like Aldous, I wanted to restore our old family car to recall the good times we had in it as a family”, added Johnson. “I feel privileged in helping restore this red Celeste for Aldous, which he will soon present to his father. But before he does, I want to make their old family car really shine and stand out. I called on our good friends at Meguiar’s to lend a helping hand.” On a overcast Thursday, the Meguiar’s detailing specialist arrived at the JSK workshop with a variety of Meguiar’s car care products that would give the Celeste the VIP treatment and leave it with a show car finish. 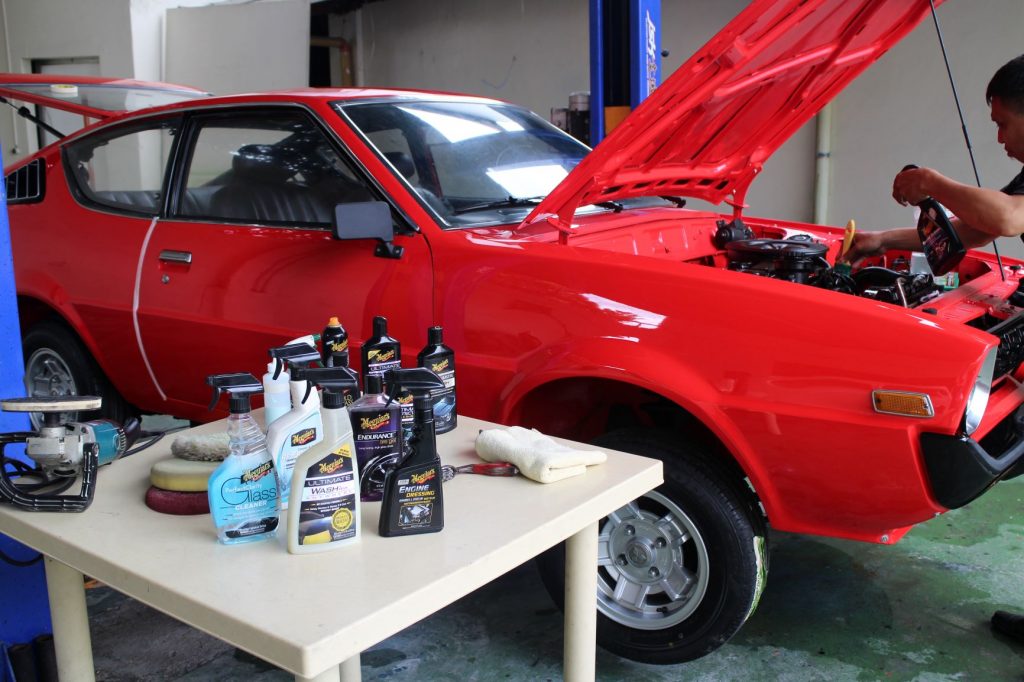 While the Celeste was on the two-post lift, we took the opportunity to inspect its underchassis and see the tons of work that went into its restoration. Since “pictures paint a thousand words”, please allow us to show you these photos with the corresponding captions, instead: 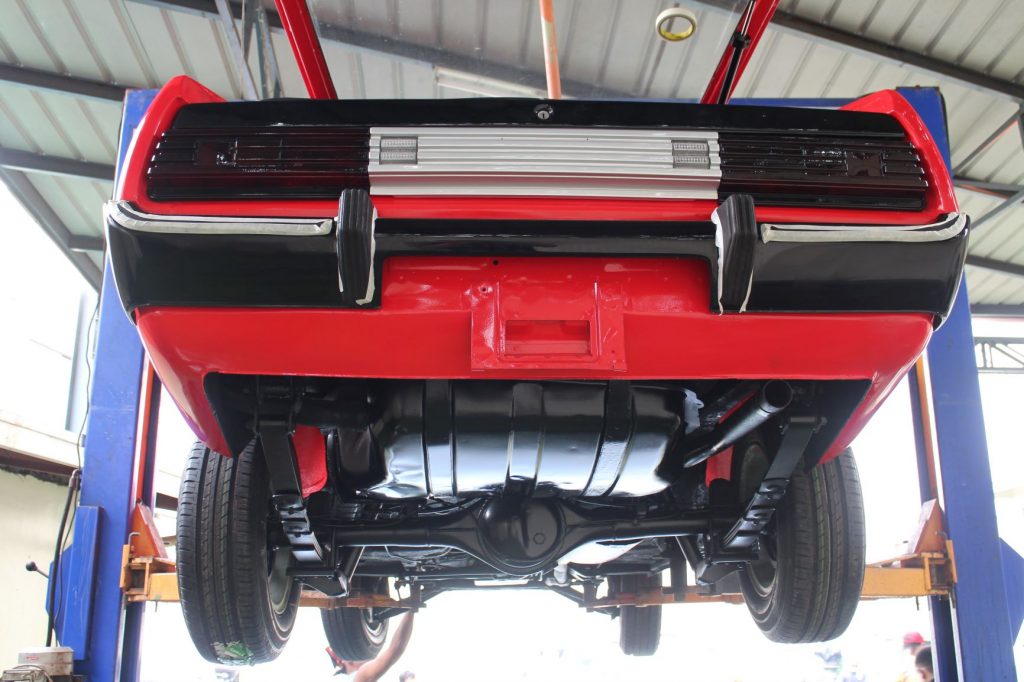 We start from the rear of the Celeste where you can see the tank, leaf springs and rear axle that were all painted in black. We are still looking for an appropriate chrome muffler tip. The rubber components of the rear bumper were masked for the detailing process. 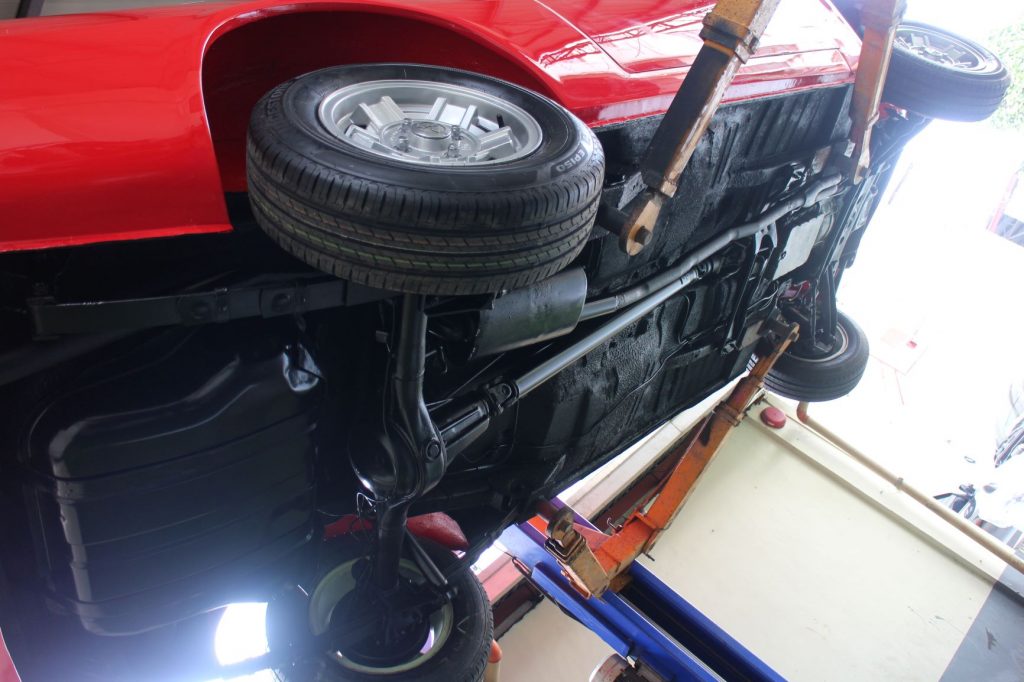 As you can see, everything underneath was painted to protect it from the elements. Aldous and his dad Bob could have the underside sprayed with rust-proofing for additional protection. 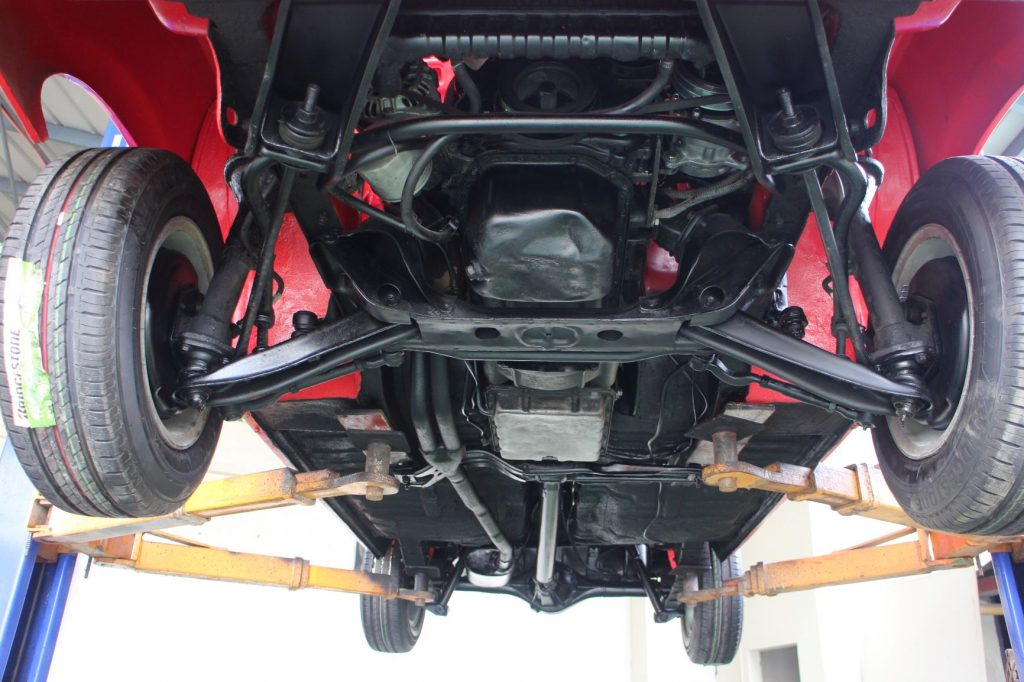 The suspension components and the frame underneath the engine were cleaned and painted black, too. It would be nice to work under such a clean machine. 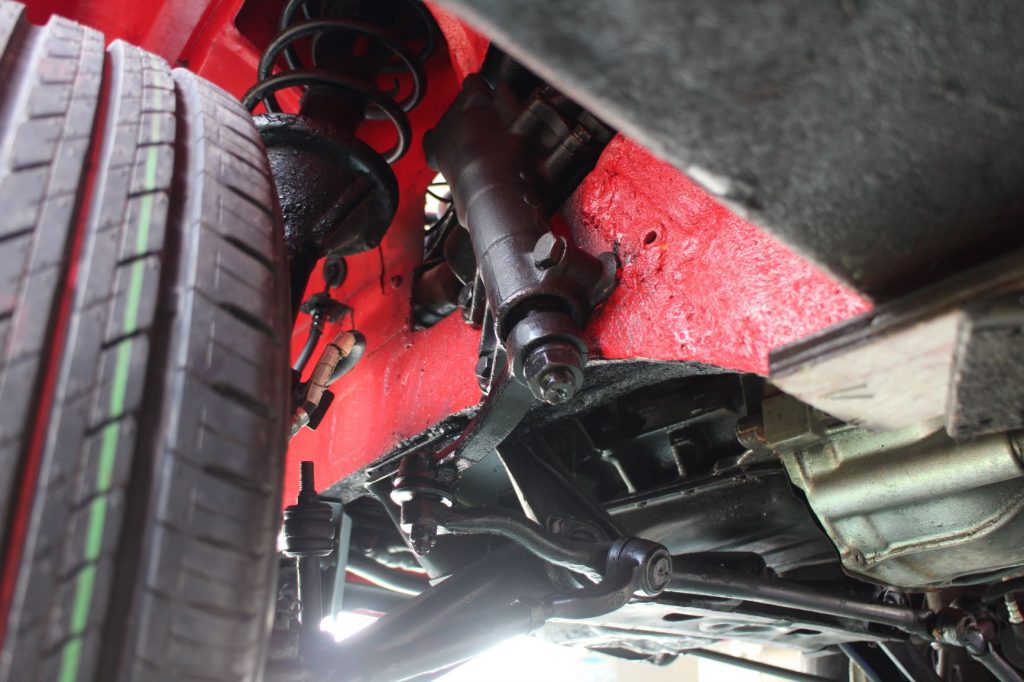 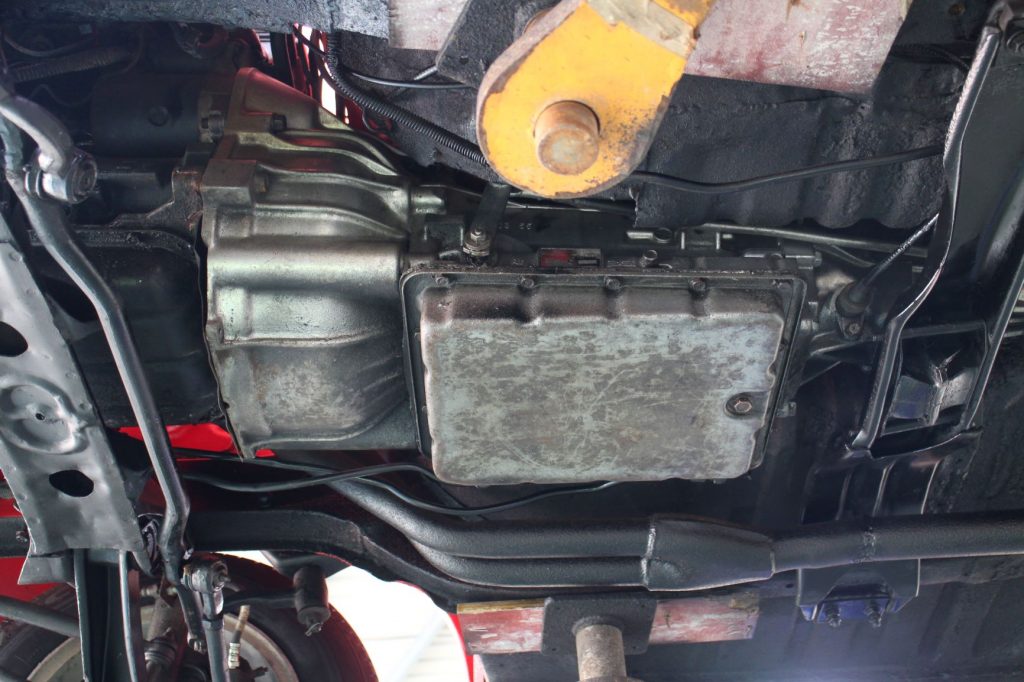 … and the 3-speed automatic transmission that we got from the 1982 Lancer SL donor car. 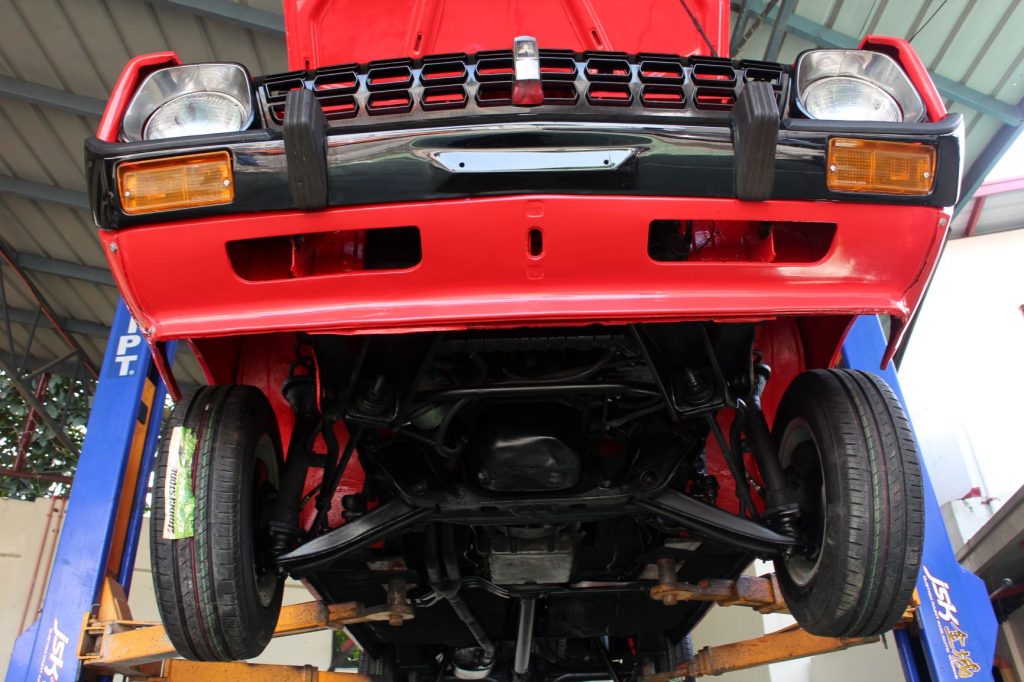 Looking at the lower part of the front end of the Celeste will make you think that it just came out from the old PAMCOR factory.

Gonna Dress You Up

Once the Celeste was lowered down, the Meguiar’s detailing specialist started working on the engine bay. Since the 1600cc 4G32 SOHC 4-cylinder engine has been removed from the car during restoration and then thoroughly cleaned and painted before it was reinstalled in the newly restored and painted engine bay, there was no need to use a degreaser. After washing the engine and its components with Meguiar’s Engine Cleaner, he hosed the cleaner out with running water, used a blower to dry the engine and the bay, and then liberally applied Meguiar’s Engine Dressing. 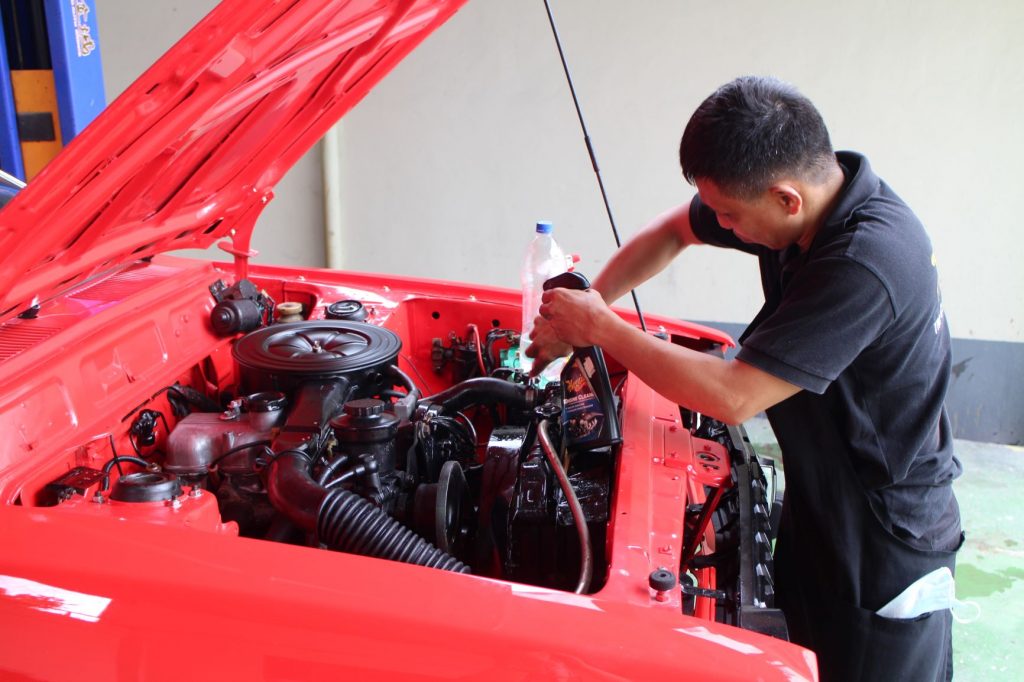 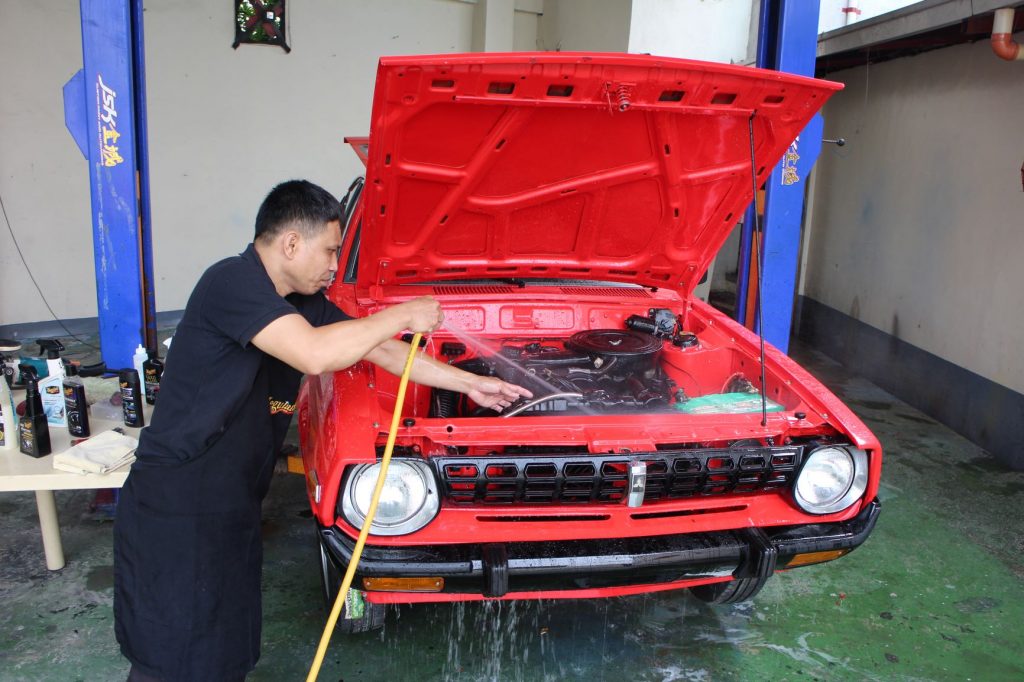 … rinses the cleaner off with running water… 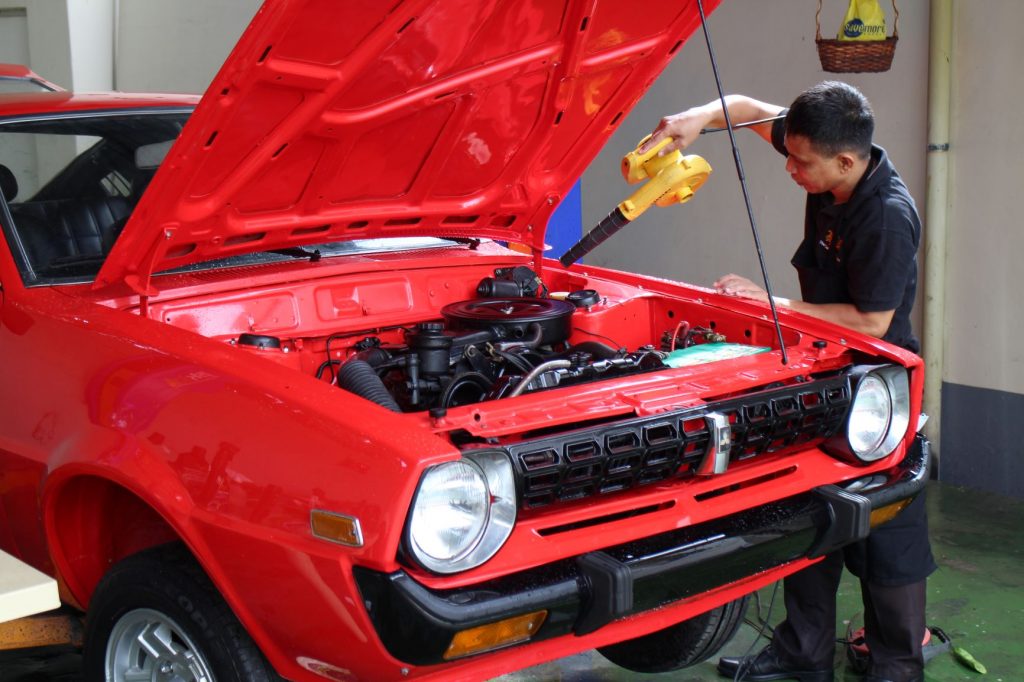 … and then dries the engine bay with a blower before applying the Meguiar’s Engine Dressing.

The timing was also quite fortunate because as the engine bay was being cleaned and detailed, the brand-new Amaron Hi-Life 115D31L 3SMF car battery was delivered to the shop. Celeste owners and enthusiasts might wonder why we ordered a bigger battery than the 2SMF that usually powers the car. Since we changed the transmission from stick-shift to automatic and added power steering, we reasoned that the Celeste’s electrical system will need a lot of reserve power. We just wanted to stay on the safe side and make sure that the Celeste’s owner, Bob, doesn’t get stranded because of a dead battery. 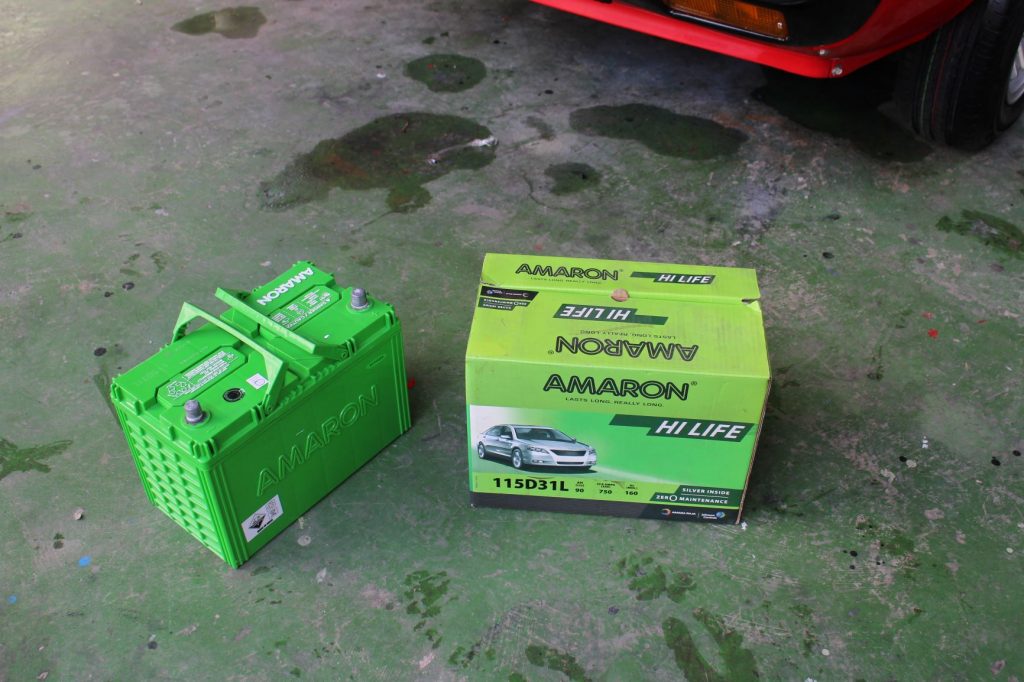 The brand-new Amaron Hi-Life 3SMF car battery was delivered while the engine was being cleaned. The new Amaron car battery and its green case stood out against the engine bay’s red paint and dressed-up engine. 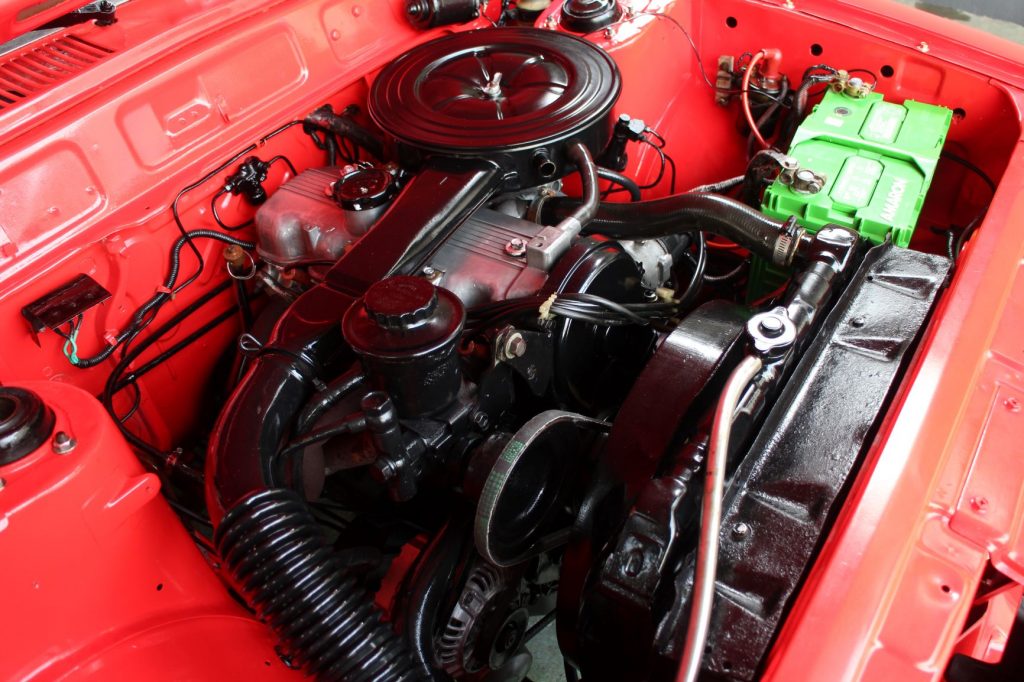 Viewed from another angle, the Amaron car battery provides a healthy green contrast to he red, black, silver and gray in the engine bay while providing reliable and healthy electrical power.

After dressing up the engine, the Meguiar’s detailing specialist moved to polishing the paintjob. He told us that he won’t need to “cut” or rub the paint since the JSK paint technicians had just finished polishing the Celeste’s glossy red paint. He proceeded to apply a few dabs of Meguiar’s Ultimate Car Wax on a panel before polishing that area with a hand-held power polisher. The detailer thoroughly inspected each panel he polished before moving on to the next panel until he finished polishing the entire car. 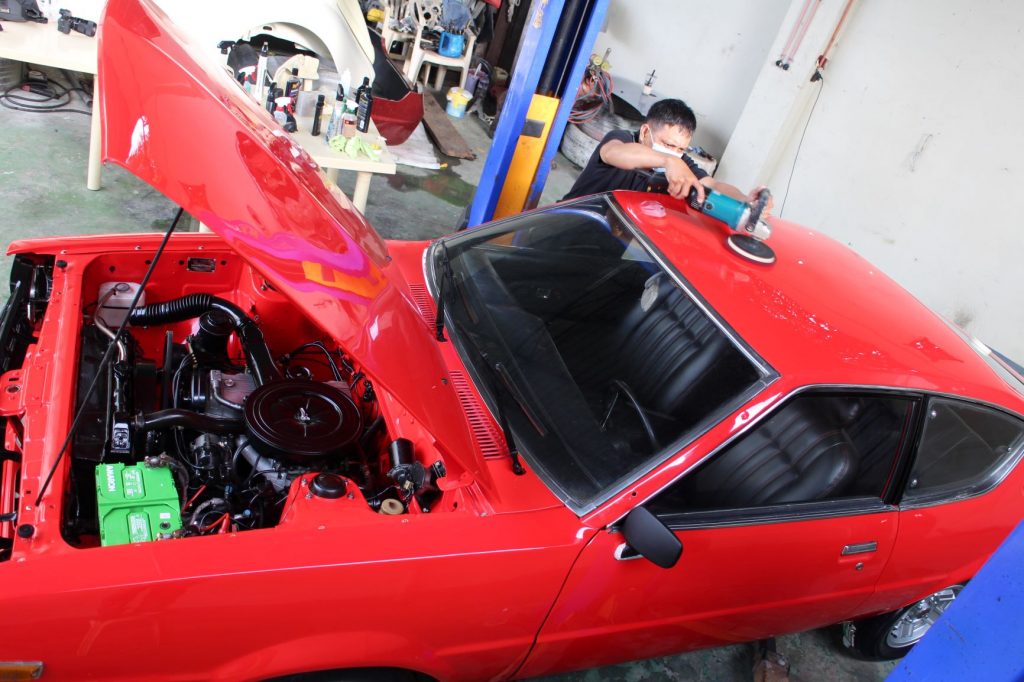 The detailer applied a few dabs of the Meguiar’s Ultimate Car Wax, spread it and polished it with a DA Power System Waxing Pad mounted on a high-speed rotary power tool. 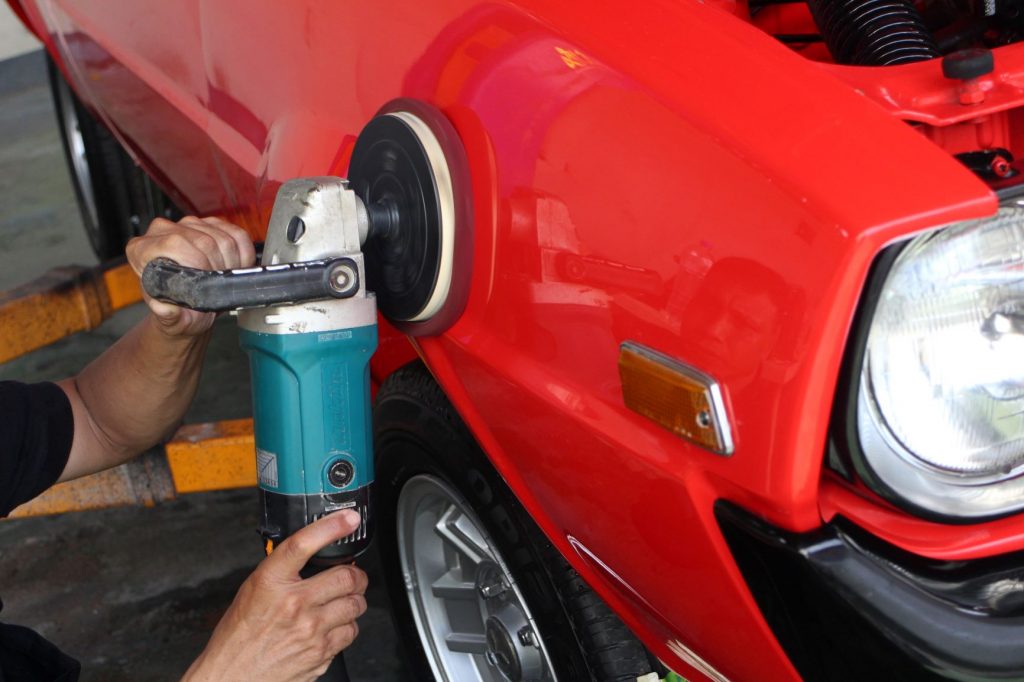 The hydrophobic polymer technology of the Meguiar’s Ultimate Car Wax makes the red paint more glossy by giving it a deep, wet-look shine. 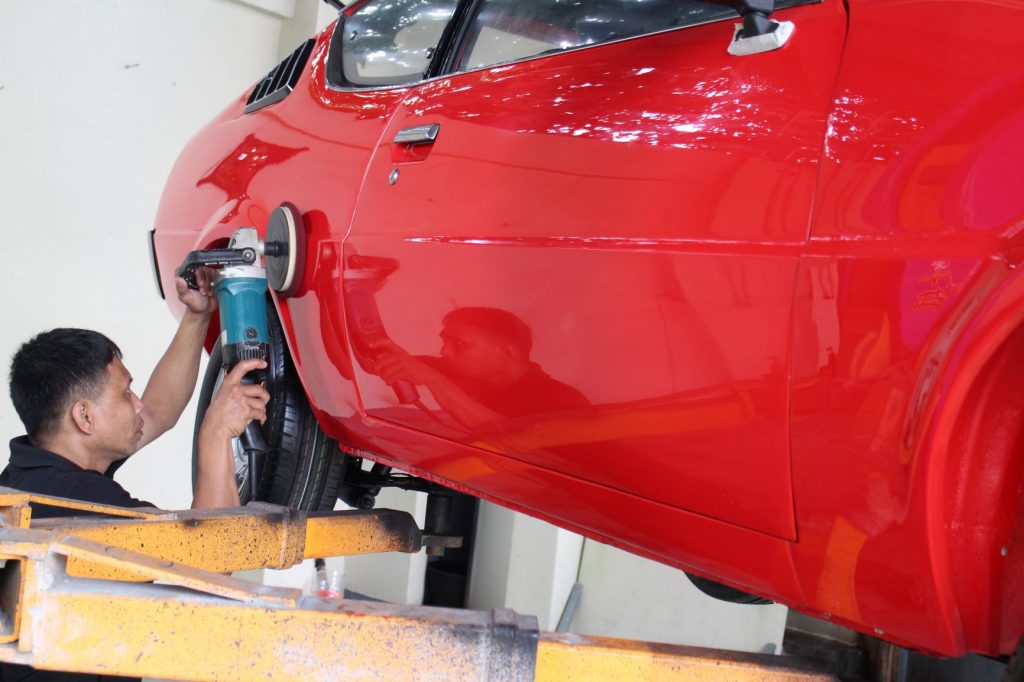 Aside from protecting the paint, the Meguiar’s wax treatment gives a deep gloss that makes the red paint look even more luscious. Just look at that depth and reflection off the door.

After waxing the entire car, the detailer turned his attention to the tires and the glass components of the Celeste. He used Meguiar’s Perfect Clarity Glass Cleaner on all the glass – the windshield, side windows, quarter windows, and rear hatch backlight (or rear window). He noticed that the 44-year-old glass had scratches on them that were marked by the years and he minimized these imperfections by “cutting” the surface of the glass with some rubbing compound with the rotary power tool. After working on the glass, he got a sponge and liberally applied Meguiar’s Wheel Cleaner on the PAWI alloy wheels and Meguiar’s Endurance Tire Dressing on the brand-new set of Bridgestone tires. 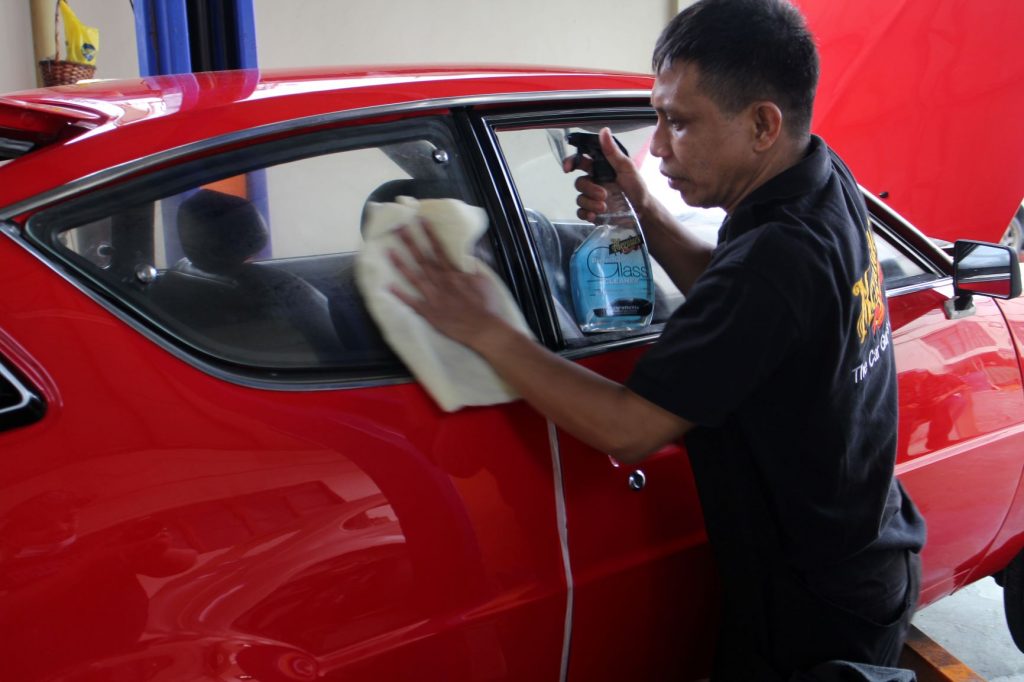 The Meguiar’s Perfect Clarity Glass Cleaner took years of grime off the 44-year old glass components of our Project Car. 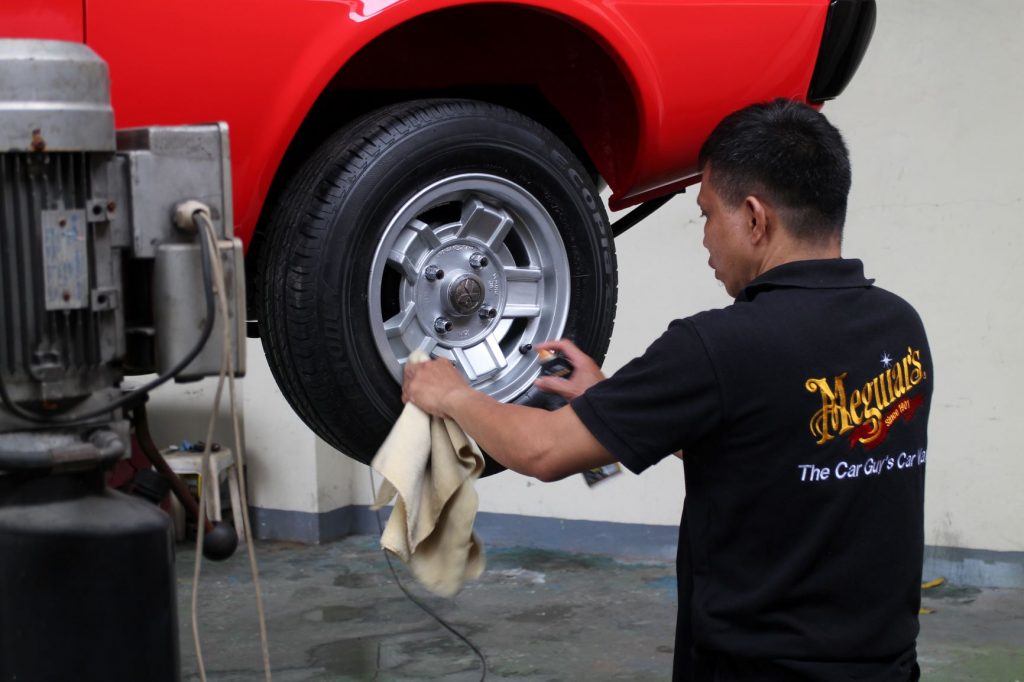 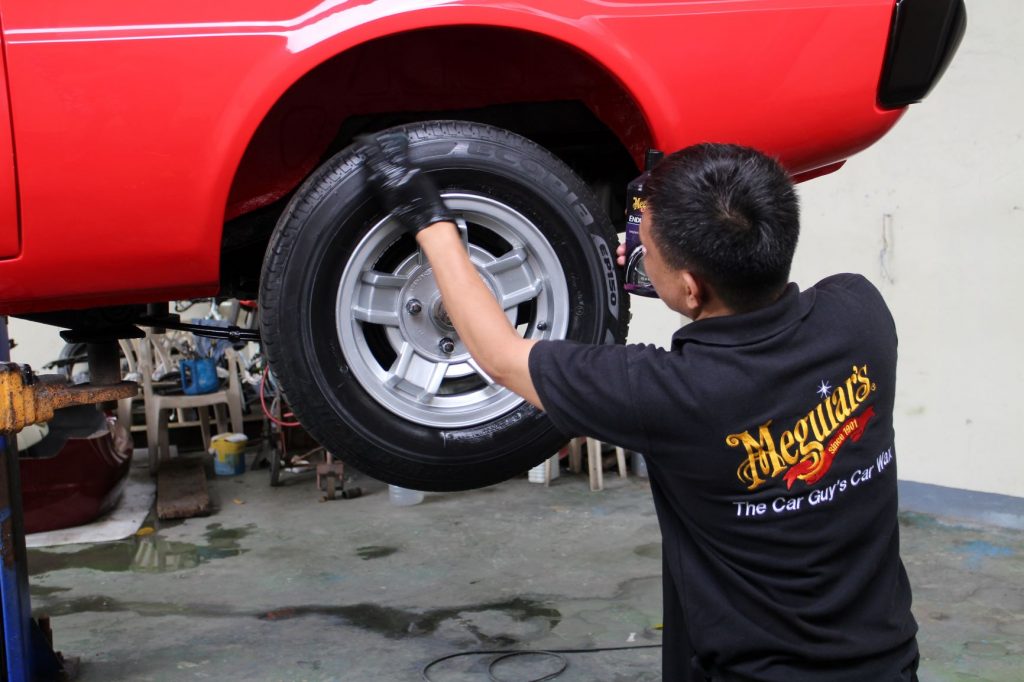 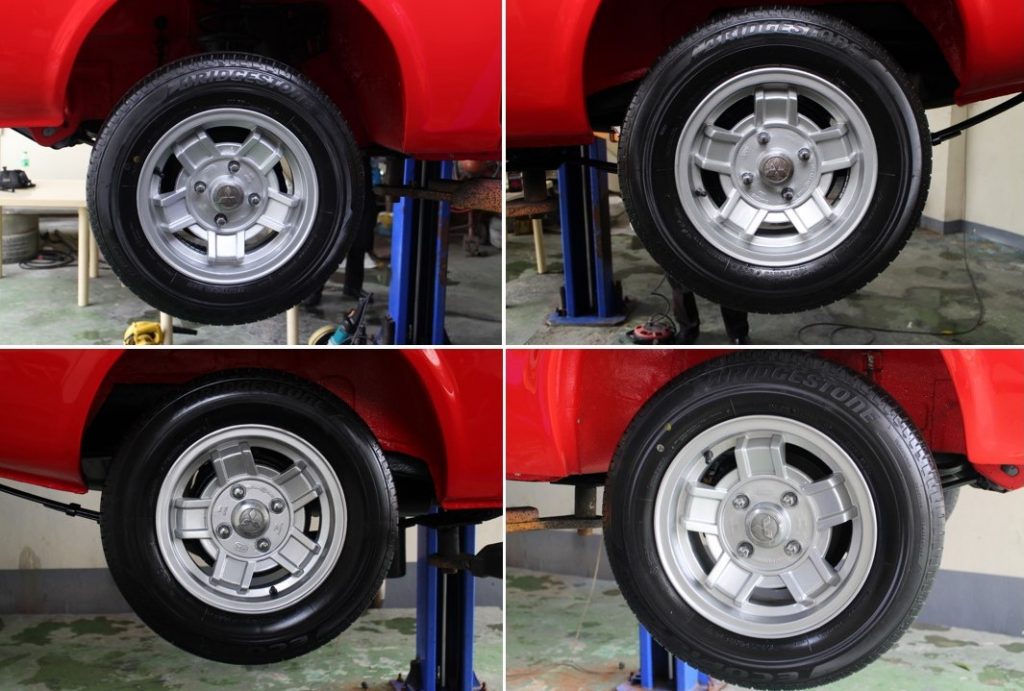 Complete with caps and new lug nuts, the Celeste’s Meguiar’s-treated wheels and tires also look like they just came from the factory.

… And We’re Near The End

It took the Meguiar’s detailing specialist two days to finish detailing and polishing the red Celeste. We found it admirable how dedicated he was to his craft and how meticulous he was in accomplishing his tasks. He is also used to detailing the show cars that JSK enters in competitions and he didn’t make an exception out of this car. “I want Aldous to be proud of this Celeste when he presents it to his father”, Johnson reiterated. “After it underwent the Meguiar’s VIP treatment, I’m pretty sure he’ll be more than proud. I just hope his dad, Bob will love it, too.” 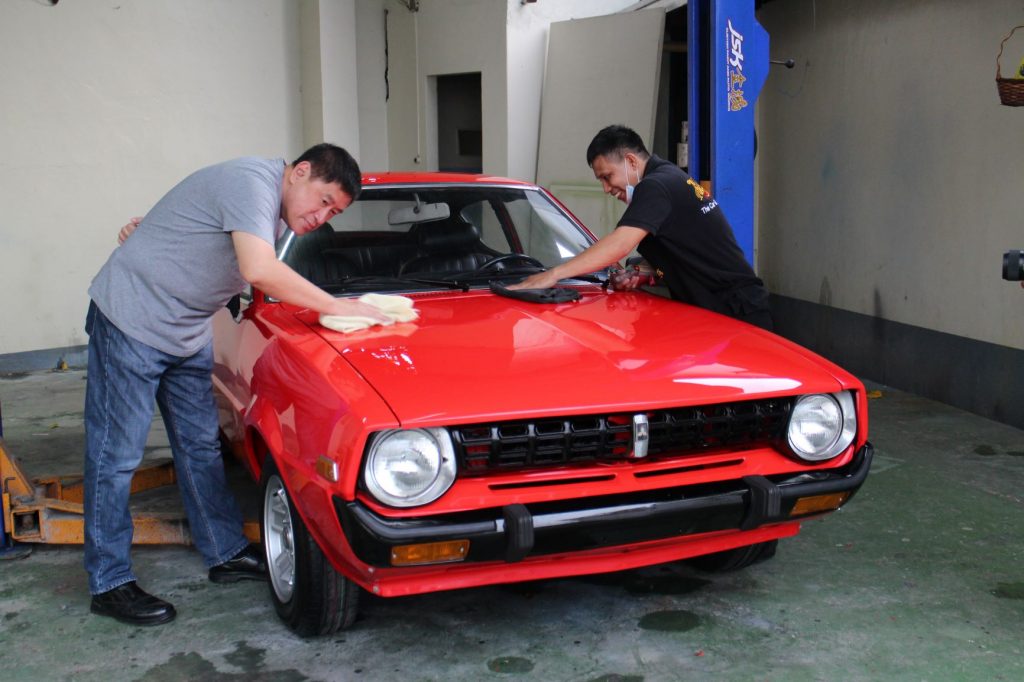 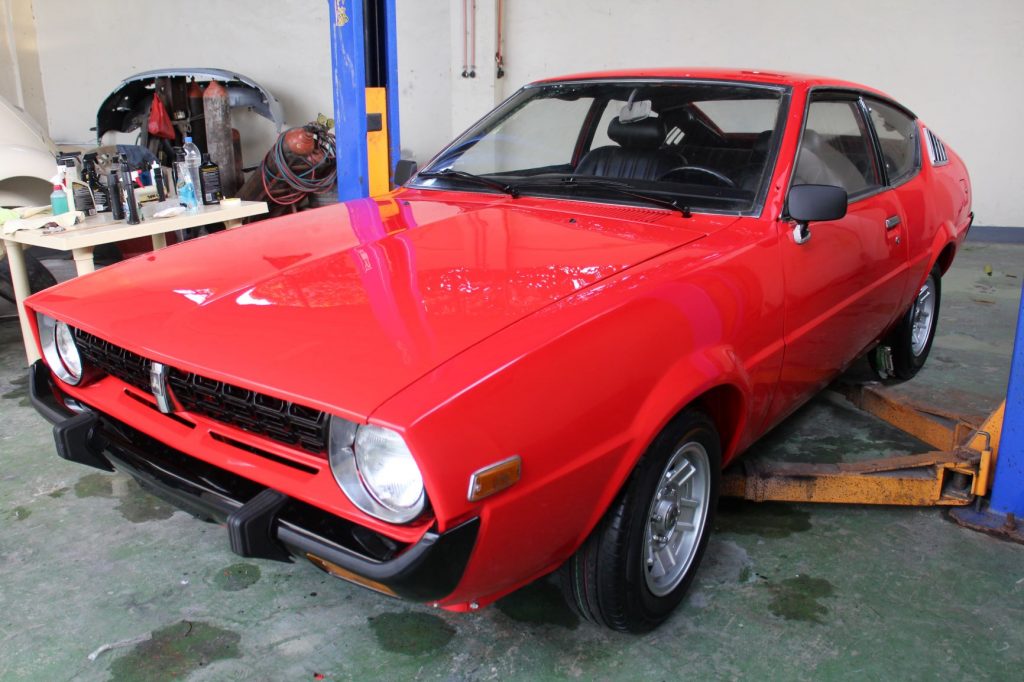 The masking tape around the stalks of the side mirrors will be removed now that the detailing is done.

Johnson plans to deliver the Celeste to Aldous and his dad by flatbed trailer after it is fully finished. He instructed us to get another Bridgestone Ecopia EP-150 tire for the spare wheel, and reminded us to get a pair of new gas struts for the rear hatch and a lock/latch for one of the swing-out rear windows. Meanwhile, we ordered a set of license plates BAF-734 so that when it gets delivered to the Alingog family, Bob will know that it is indeed his old  that has been restored and ready to take him back down memory lane. 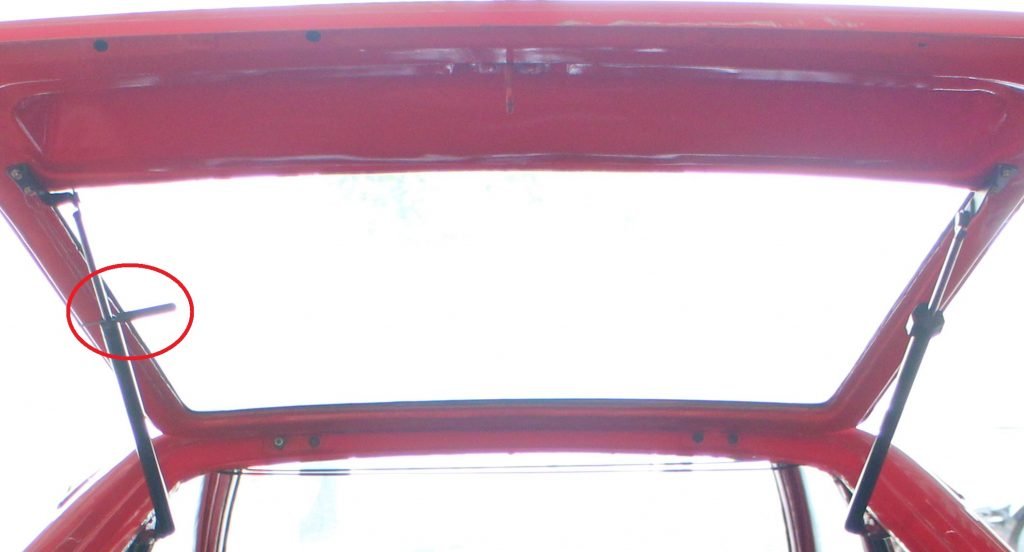 Can you help us find new gas struts for the rear hatch like these two? We need to jam a small screw driver (red circle) to keep the hatch back open. 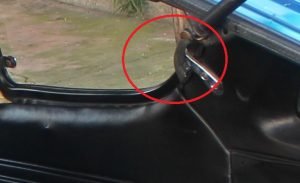 We also need to find a lock/latch for the swing-out rear window. 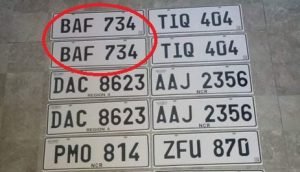 We were also able to order a pair of new license plates to replace the damaged old ones.

Tune in next time when we give this red 1976 Mitsubishi Celeste 1600ST one last thorough inspection before we hand it over to Aldous, who will present the car to his father and the Celeste’s original owner, Bob Alingog.