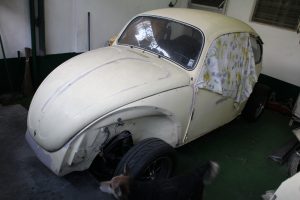 Our Project Car when we first saw it at the garage of Fons Caluag.

When we got the 1973 Volkswagen Beetle 1600 of our family friend and VW enthusiast Ildefonso “Fons” Caluag, our initial assessment is that we just needed to continue the paint wash-over that was abandoned by an unscrupulous journeyman painter. We got a wash-over sponsorship from Johnson Tan, the proprietor of JSK Custom Paint and Auto Works, and we had the car flat bedded from the Caluag residence in Pandacan, Manila to the JSK workshop in Marulas, Valenzuela City last February 10, 2019. 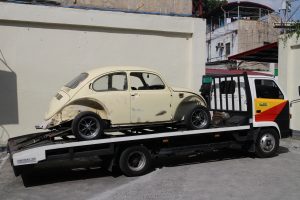 Auto Transporter flat bedded the Beetle from Pandacan to the JSK workshop in Valenzuela City.

However, when the technicians at JSK inspected the Beetle before prepping it for paint, they noticed that some things were not right. The previous painter had sanded down the existing cream paint in preparation for the re-spray and then added body filler to cover some imperfections. However, upon initial inspection, the JSK technicians found out that the former painter did a really lousy job. 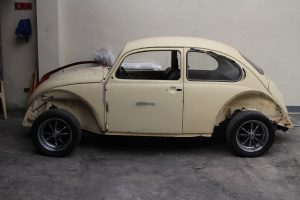 We went to the JSK workshop today (February 27) to get updates on the progress of the Beetle’s paint and body work. We talked to the JSK painter assigned to the car and he was applying a layer of body filler to the left side of the car. He was also kind enough to tell us the hidden issues of the 46-year-old Beetle. He started with the doors: “I noticed that some of the paint on the doors was being pushed out by old body filler underneath so I scraped the paint off down to bare metal”, said the painter. “I found that half of the door has been replaced by galvanized steel and that it was the poor preparation during the previous paint job that was ruining the paint’s adhesion.” 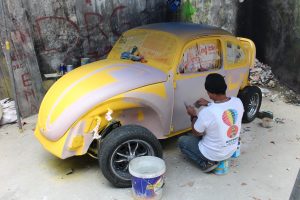 The JSK painter was applying body filler when we got there. 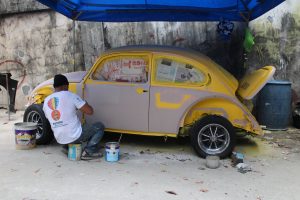 He just finished covering the driver’s door with a thin layer of filler.

“After cleaning the metal, I sprayed it with yellow etching primer to protect it”, he continued and then guided us to the right side of the car. “And you can still see the stitch welding job binding the upper and lower parts of the passenger door before I apply a thin layer of body filler. Overall, the metal and body work are excellent. It was the last paint job that wasn’t up to standards. If the previous painter continued with his lousy work, he would have ruined an otherwise straight and solid Beetle.” 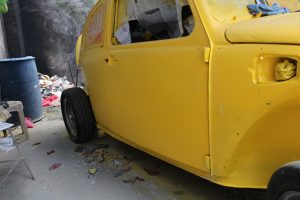 He guided us to the right side of the Beetle to show us the bare metal covered with yellow primer. 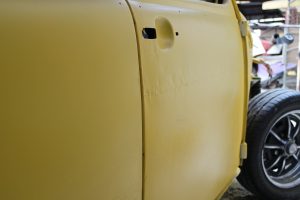 The stitch weld binding the upper and lower part of the door skin was well done and needs just a little filler.

It was nice to know that the JSK painter was concerned about how the paint preparation will affect the final finish of the Beetle, especially after he learned that the owner, Fons, is an 80-year-old VW enthusiast. “The previous painter was obviously doing a fast number on your dad’s friend”, he said. “He applied body filler on some rusted portions of the body to finish the work quickly. Of course, the rust will eventually push the paint out and bubbles will form on the surface.” He then pointed out some rust bubbles on the Beetle’s fenders, which have not been worked on yet. “I might need to scrape the paint off one fender but the other three are still in good condition. The owner really cared for this car.” 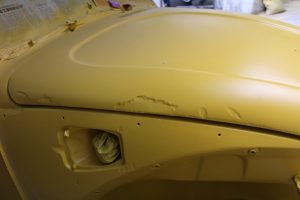 The front hood had a thick layer of filler that will be sanded down. 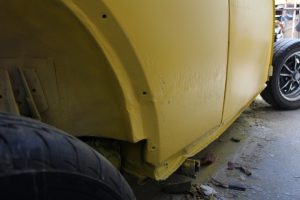 The lower portions were wire brushed and sanded to remove the bad prep work before the primer was reapplied.

The JSK painter also wondered why the previous painter sanded down the Beetle’s paint and applied body filler without spraying some primer first. “The sanded-down paint might not provide a good surface for the body filler to adhere to. If he continued with the work, all that filler will eventually peel off and cause paint ripples and cracks. I had to clean all of the bad prep work that he did. He did a really lousy job. He is giving the people of our profession a bad reputation”, he retorted. 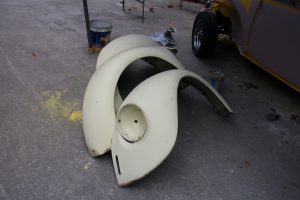 The fenders were the next to be prepared after the JSK painter is finished with the prepping the body. 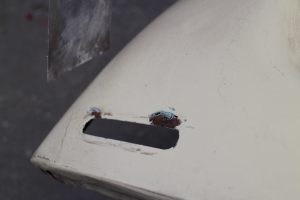 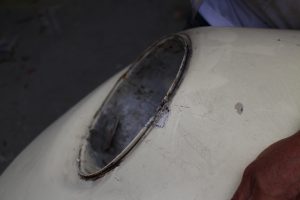 … as did the metal around the headlight bucket. This will be repaired.

He pointed out some old body filler that needed to be sanded down to capture the original shape of the Beetle. “Overall, this car is straight and solid. I’ve worked on some Beetles before and this one has the best original body that I’ve ever worked on. I’m glad that we’re able to restore this classic VW correctly.” We’re likewise glad that we took it to JSK Custom Paint and Auto Works and they’re doing a great job so far! More reports next week! 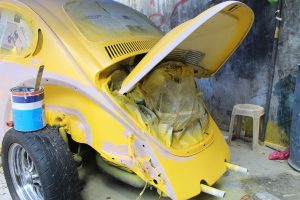 The flat four motor was masked to prevent paint overspray on the engine tin. 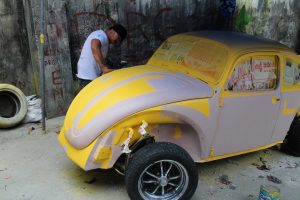 The JSK painter meticulously traces the original lines of the Beetle. 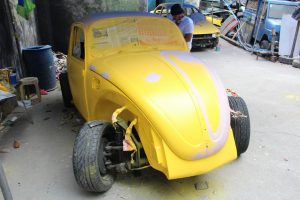 We can’t wait for the next step in the paint process of our Project Car!