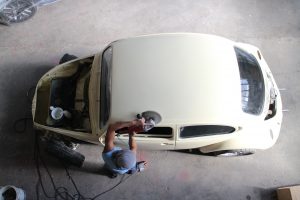 When we last visited our 1973 Volkswagen Beetle 1300 S project car, its paint was being buffed and polished to perfection. Between now and then, the Beetle’s four fenders were painted and polished, and then installed along with the fender beads, or fender liners as they are more commonly known here in the Philippines. The mechanics at JSK Custom Paint and Auto Works have also attached the bumpers, the left side rear view mirror, the door handles, and most of the external trim pieces. 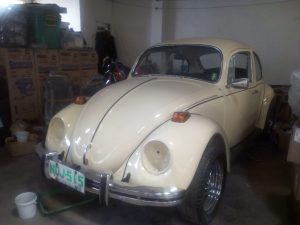 The JSK technicians installed and aligned the front wing vents; installed, aligned and lubricated the window riser mechanism on both doors; installed the lock mechanisms, and fitted the window glass. They made sure that everything was properly aligned that when you open the doors, they swing effortlessly and when you close them, they close with a reassuring “thunk”. We were very impressed with the assembly process so far and we were advised by JSK shop foreman Erene to acquire the correct “thin” door weather strips because he said that the incorrect thicker ones won’t make the door open and close as smoothly. We have to check with the Beetle’s owner, Ildefonso “Fons” Caluag, if he has the correct thin rubber weather strips. 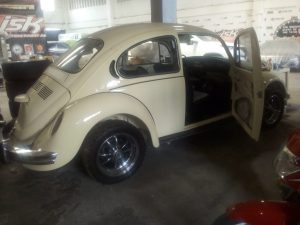 The doors were aligned properly and open with smooth ease… 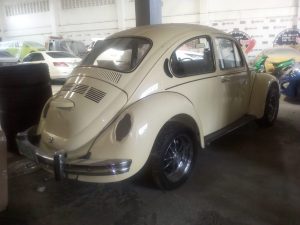 … and shut properly with a reassuring and Teutonic “thunk”.

Astute readers will notice that the metal trim were painted black instead of chromed – that was how the owner, Fons, wants it. We’re not sure, however, if the rear license plate was mounted by the owner on the rear bumper, and not on the engine lid as it was designed to be. Or if it was temporarily mounted by the JSK personnel just to ensure that the plate stays with the rest of the Bug’s parts. This is one of the difficulties of reassembling a project car that we did not disassemble. It’s a good thing that we can check with the owner on this matter than merely guess. 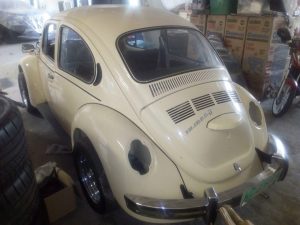 We hope that the rear bumper-mounted license plate is only temporary.

The model emblem was securely mounted on the engine lid as was the license plate light housing. The step boards were likewise securely fastened and aligned. Erene said that they were still working on cleaning the electrical contacts before mounting the taillights and headlights. Then they will test all the electrical components to ensure that they all properly function as they were designed to be. 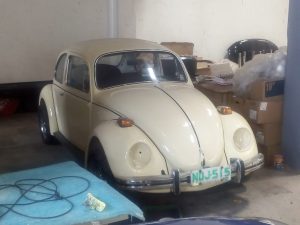 When we arrived at the JSK workshop along Encarnacion Road in Marulas, Valenzuela City, it was a little past 12:00 NN so naturally, the personnel were all on lunch break. Erene narrated that they were working on installing the bits and pieces needed to complete the interior. When we tried to open the front trunk lid, err… hood, it was locked shut despite trying to unlock it with the lock lever located inside the glove compartment. Erene promised to fix it after lunch break. 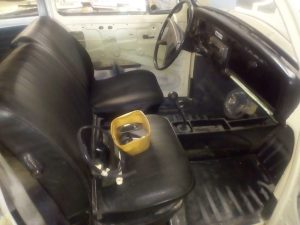 They were obviously working on the interior before lunch break. 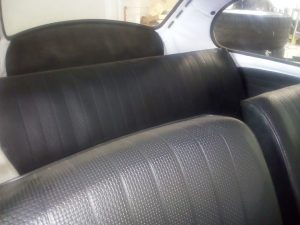 The seats are still in good condition and were thoroughly cleaned by the nice people at JSK.

If you will recall, this Project Car created a bit of controversy when we first labelled it as a “1973 Volkswagen Beetle 1600” at the start of our Power Wheels coverage. More controversy was generated when we wrote that the owner claimed it was a rare “13/16” or a special-edition Beetle with a 1300 body and a 1600cc flat-four engine. We felt that these issues were finally settled when we found our Bug’s original “VW 1300 S” emblem, which authenticated the fact that our Beetle was actually fitted with a 1.6-liter boxer engine straight from the factory. 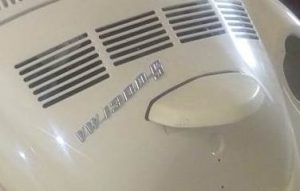 Then we got this note on the Power Wheels Facebook page from Colin E. Shinkin of Special Edition Beetles that read: “Hi guys. One of our team members here at Special Edition Beetles has been discussing your car. This is what we think – ‘It is a Beetle built in April 1973, which would fit to the Spring Messenger period. Philippines got CKD (completely knocked down or disassembled units) from Germany until 1974 and later from Brazil (like the Champagne Special Edition). So, both Germany and DMG (Domingo M. Guevarra, the former Philippine VW distributor) could be right.'” 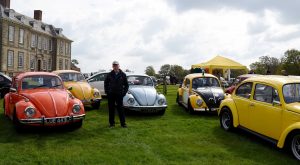 Mr. Shinkin continued: “But the type plate is fake, as it is of a car built in October 1971. Someone hammered the car’s VIN (vehicle identification number) behind the type code. Underneath is the factory Fahrgestellnummer (Fahrgest-Nr). The gauges seem to be well fit but factory equipped cars like the 1600 SP had a different setting. But the most interesting part is the engine number AD862653. I found on the Samba that the last AD-series engine was 749788 in July 1973.” We looked closely at the “erased” Fahrgest-Nr. 112 229 0492 and the engine number, and we were equally intrigued by these observations raised by Mr. Shinkin. 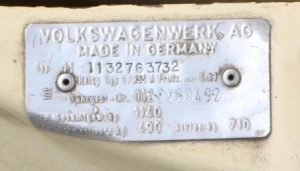 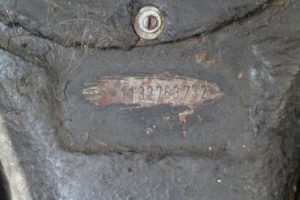 … which matches the numbers stamped on our Project Car’s floor pan chassis. 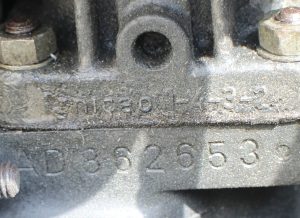 Shinkin advised us to send him a photo of our Beetle’s Production Plate, which would normally be mounted next to the hood lock. Since our Beetle’s front hood lock didn’t want to cooperate with us, we searched our archives of photos to see if we could find a Production Plate that matches the one Colin wanted us to show him. We were really intrigued with the new developments in authenticating our 1300 S that we decided to prioritize these things before we wrap-up our series of stories on this Bug. Watch out for next installments! 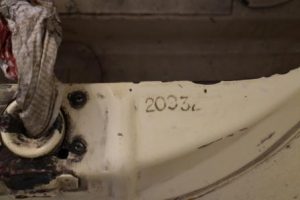 … but we only found stamped numbers 20932 on the spot where the plate was supposed to be. 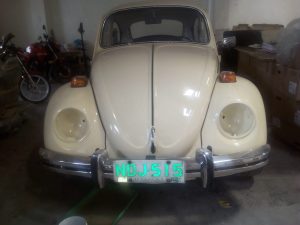 This handsome Bug is beginning to bug us with more controversy as it nears completion.