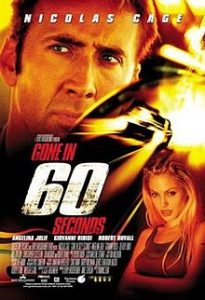 After “Gone in 60 Seconds” starring Nicolas Cage and Angelina Jolie was shown in cinemas around the world, people always picture “Eleanor” as a gun gray 1967 Ford Mustang Shelby GT500 with black stripes, aftermarket body modifications and fat wheels. The ’67 Shelby was, of course, a clone because nobody would dare desecrate and wreck a rare original that now costs more than a suburban house and lot. 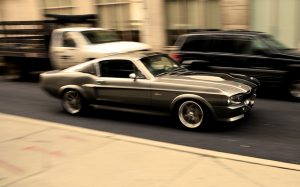 Most movie fans think that this 1967 Shelby Mustang GT500 is the original Eleanor.

Unknown to many car buffs, the 2000 movie is a remake of a 1974 action film of the same title. Like the later version, the original movie centers on a group of car thieves and the 48 cars they must steal in a matter of days. The film is famous for having wrecked and destroyed 93 cars in a 40-minute car chase scene. Maindrain Pace, played by actor H.B. “Toby” Halicki, is a respectable insurance investigator who is also the leader of a professional car theft ring that steals and re-sells stolen cars. As an insurance industry insider, Pace has one small idiosyncrasy – all vehicles stolen must be insured. 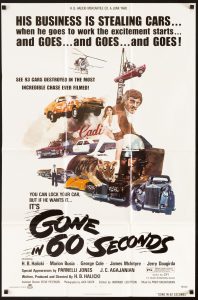 Pace is approached by a South American drug lord who offers $400,000 for the theft of 48 specific vehicles, including a yellow 1973 Ford Mustang Mach 1, which they code-named “Eleanor”. The first Eleanor they come across is occupied; the second car results in a chase as its drunken owner pursues Pace. A third Eleanor is acquired seemingly without issue but was discovered to be uninsured within hours of delivery. 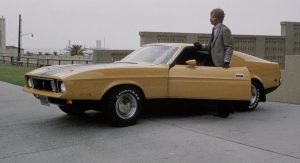 Pace returns it and steals a fourth Eleanor but was tipped off to the police and a 40-minute car chase ensues where 93 vehicles are destroyed and 6 California cities from Long Beach to Carson are covered. While eluding the police with speed and his driving skill, Pace caused extensive damage to the car. He finds and steals a fifth Mustang in a car wash and finally gets away from the police. 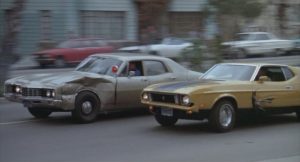 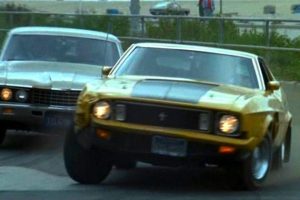 … and both cars are dented and damaged during the chase.

As an independent film, Halicki wrote, starred, directed, produced and even did his own stunt work in the film. There was no official script and much of the action and dialog was improvised and ad-libbed by the cast and crew as they went along. The 40-minute pursuit is the longest car chase in movie history and there was scene that was a real accident where Halicki was badly hurt and filming was stopped while he recovered. 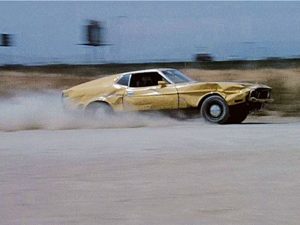 The yellow Mach 1 was heavily dented but was still running… 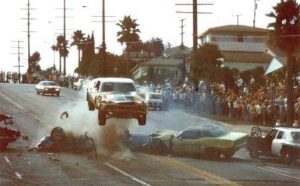 … until it did that incredible 30-foot-high 128-foot-long jump without the aid of CGI.

The jump scene at the end of the chase is notable and set the standards for subsequent films. The jump achieved a height of 30 feet over a 128-foot distance, a feat rarely attempted today without CGI or gas-driven catapults. Halicki compacted ten vertebrae performing this jump and never walked the same again. Despite the carnage, the wrecked Mustang Mach 1 was never fully repaired and was used to promote the movie doing promotional drives and runs in front of cinemas and theaters. 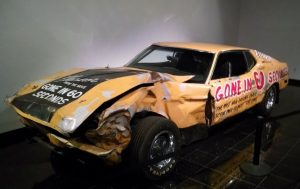 The original movie car was displayed at the Petersen Automotive Museum in Los Angeles, California.

Here’s an important piece of trivia for hawk-eyed fans: In 1973, buyers of the Ford Mustang Mach 1 can choose between three V8 engine options – a 140-hp 302 cubic-inch Windsor V8 with a 2-barrel Autolite 2100 carburetor (F-Code), a 177-hp 351 cid Cleveland V8 with a 2-barrel Autolite carburetor (H-Code), or a 266-hp 351 Cleveland V8 with an Autolite 4300D 4-barrel carburetor (Q-Code). There’s also the option of installing a Ram-Air system that uses NACA ducts on the hood to force cold air into the air cleaner assembly and make more power. As you can see, the movie car has a plain hood with no NACA ducts so it was not equipped with the Ram-Air option. However, it was not mentioned in any literature what engine was in the Eleanor movie car, but we can assume that the F-Code 302 Windsor was used for the cruising shots while the more powerful Q-Code 351 Cleveland was used for the jump scene. What a waste of good’ ol’ Amercian muscle cars! 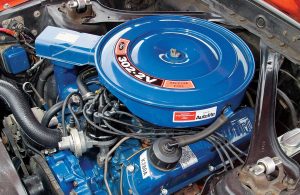 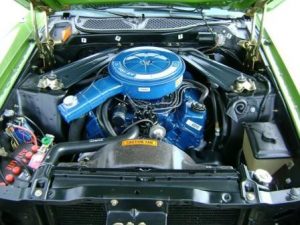 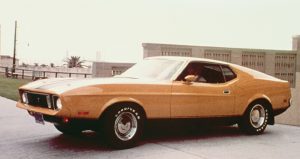 Any of the three engine options above can fit under the plain hood of the Eleanor movie car. 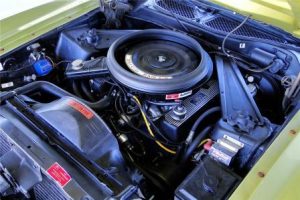 The Ram-Air option has a rubber seal to mate the top of the air cleaner with the hood.

NACA ducts on the hood of this ’73 Mustang Mach 1 shows Ram-Air option.

So, which Eleanor do you prefer? The original movie’s authentic 1973 Ford Mustang Mach 1 or the remake’s 1967 Shelby Mustang GT500 clone? Let the comments commence…