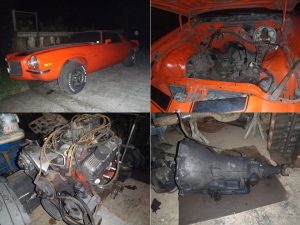 In June 2013, we took our 1971 Chevrolet Camaro RS project car to Ben Lim’s workshop in Cainta, Rizal in eastern Metro Manila. In July, the engine bay was devoid of the original 307/327 V8 and Turbo 350 3-speed automatic transmission and was waiting for a newly assembled 383 and refurbished 700R4 4-speed automatic with overdrive.

Then, sometime in October 2013, a tropical storm “Habagat” crossed over Metro Manila, that brought heavy monsoon rains and flood waters. Unfortunately, our Camaro was parked outside Ben’s elevated workshop since he couldn’t drive it in without an engine. We learned that our project car was a “swimmer” or was totally submerged in water that was as high as five feet. Ben couldn’t do anything but watch. Darn. Our Camaro was high and dry when Typhoon Ondoy and other catastrophes threatened the metropolis. Now, it has become an engineless “Orange Submarine” just because of mere tropical monsoon. Ouch. 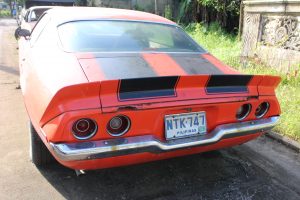 After Habagat, our Camaro showed a thin film of dry mud on the exterior. 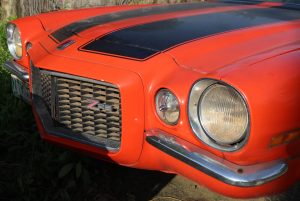 Rust is pushing the rubber grille divider while all the front lamps were submerged, too. 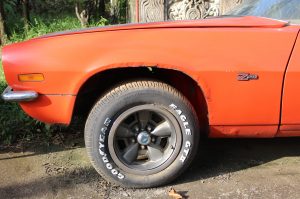 The rust bubbles on the front fender lip were amplified by the floods. 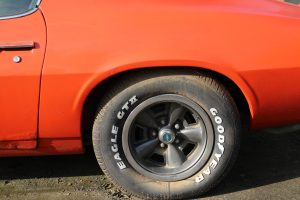 Rear panel remains solid but floods pushed the rust on the door edges. 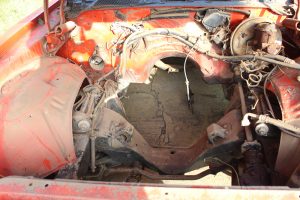 Brake master cylinder and other vital parts and hoses were exposed to flood waters.

The interior was covered with mud and needed immediate cleaning.

Auto Transporter to the Rescue

But, like the old saying “No use crying over spilled milk”, we cannot waste time waiting for the maestro to finish our 383 V8 and make our Camaro run under its own power to the workshop of JSK Custom Paint and Auto Works. We cannot waste time and allow molds, mildew, bacteria and rust to grow further in our project car. So, we immediately had it flat-bedded by Auto Transporter from Ben’s place in Cainta to the JSK workshop in Valenzuela City sans engine, transmission, radiator, driveshaft and exhaust system. We know that having your project car’s parts scattered in different workshops is a bad idea but we had to act quickly. 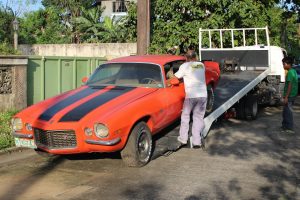 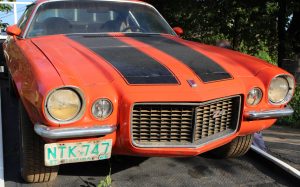 On the ramp, we saw that the right headlamp assembly still retained some water. 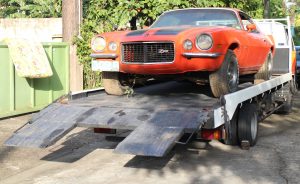 Once our Camaro was up on the flatbed… 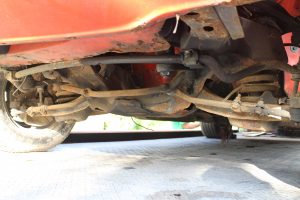 … we were able to inspect the flood damage underneath. 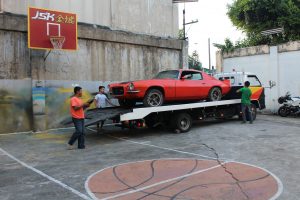 Our project car arrives at the JSK Custom workshop in Valenzuela City. 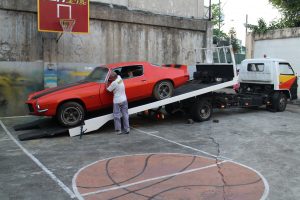 It was carefully off-loaded from the Auto Transporter flatbed truck. 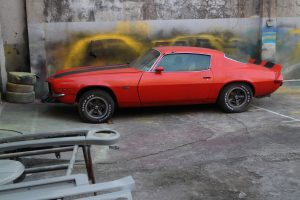 Our Camaro awaits its fate.

It took some time before we were able to get over the horror of seeing our Camaro in a flood-damaged sorry state. But six months after we dropped it off at the JSK Custom workshop, we were anxious to see how the restoration work was progressing. We found that it had been dismantled, or deconstructed, which is the latest word for American restorers. However, we were surprised with the amount of rust that the JSK technicians had found, removed or repaired in our project car. 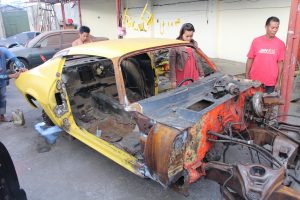 Our Camaro was reduced to its shell and front subframe. Shawie’s face says it all. 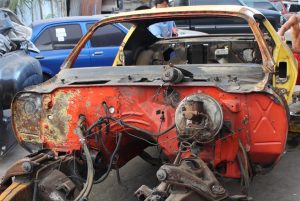 The front firewall needed some metal work. Wiper motor, brake cylinder and booster will be replaced.

Some metal work has been done on the body shell and the good panels were primer-painted. 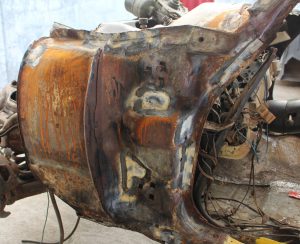 Rust has gone into the front door posts and front bulkhead. 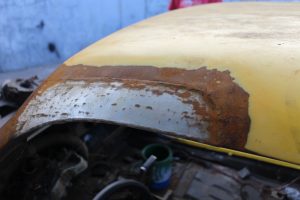 The hole in the roof over the driver’s side has been patched up. 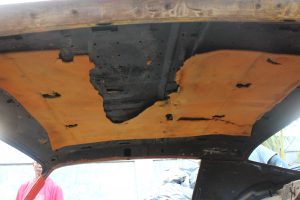 The inner roof was spared from rust. Padding will be discarded. 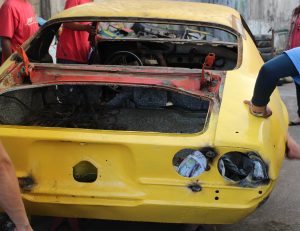 Based on his experience working on show cars, JSK Customs proprietor Johnson Tan recommended new or reproduction left and right front fenders, hood and truck lid for our Camaro because the old ones were too rusty to repair. He added that getting the correct and accurate alignment of the panels will be difficult if we reuse these rusted parts, especially since they were repaired incorrectly in the past with too much body filler. Besides, Johnson also reasoned that new sheet metal would provide crisp body lines that could win the approval of car show judges since we were planning to enter our Camaro in future competitions. 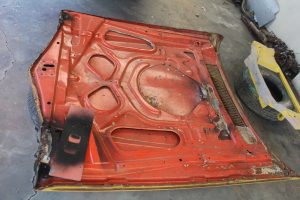 JSK technicians tried to work on the front hood… 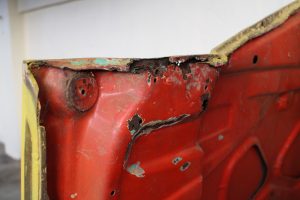 … but its edges were beyond repair. 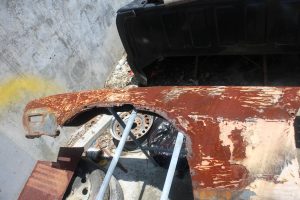 Left front fender was too rusted out to be used. 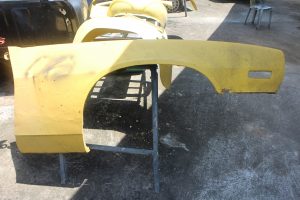 Right front fender was beat and rusty at the edges. 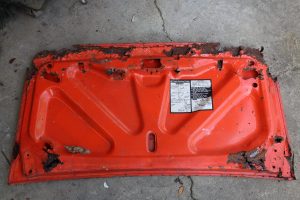 We searched the internet for our needed parts and found that there’s a lot of Camaro restoration parts suppliers. We were able to get catalogues from Rick’s Camaros (formerly Eckler’s) as well as from Classic Industries, National Parts Depot (NPD), Original Parts Group (OPG) and Year One. A friend recommended that instead of buying brand-new reproduction parts, we should source the fenders, hood and trunk lid from a dismantler in the USA, preferably one from the dry regions who deals in rust-free body parts. Luckily for us, we have friends and relatives in the States who could source these parts for us. Of course, we would have to pay the requisite taxes, handling fees and Customs duties and wait for the parts to be shipped. It will just take time and money. 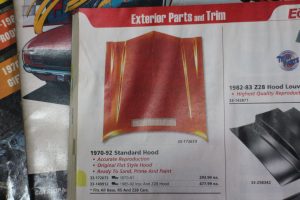 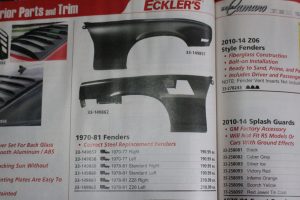 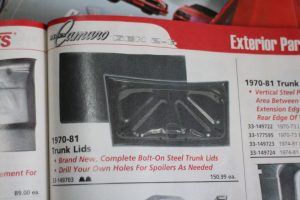 And, unfortunately at the moment, time and money are resources that we don’t have plenty of. We have to carefully plan the restoration of our Camaro or else it will cost us an arm and a leg. (As if it hasn’t yet…) Thus, our first order of business is to make a Restoration Plan, which we plan, err… aim to do in the next installation of this series. Stay tuned! 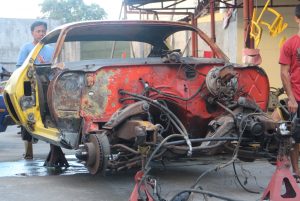