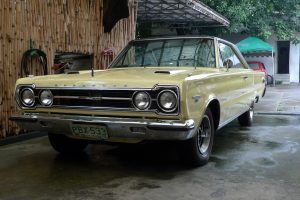 Although there had been numerous performance cars from Plymouth, the Chrysler Corporation’s now defunct third car brand, it wasn’t until 1967 that they offered a model that came standard with the necessary performance goodies.   The 1967 Plymouth Belvedere GTX (RS23), which was positioned as “a gentleman’s hot rod”, offered stylish performance for the discriminating buyer.  Introduced as Plymouth’s first unified performance model and based on the company’s stylish two-door Belvedere hardtop and convertible, the GTX received a special grille and tail panel, simulated hood scoops, and “pit stop” chrome gas cap while twin racing stripes were optional. 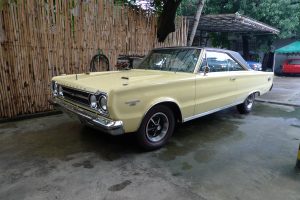 On the road, the GTX boasted superb handling, thanks to standard six-leaf rear springs, heavy duty shocks, torsion bars and ball joints, though many believed that the power steering was a bit too over-assisted.  While disc brakes were optional, these didn’t seem to provide much advantage over the standard drum brakes.  Inside, the interior was pure luxury with bucket seats, embossed vinyl and lots of bright work and chrome trim. 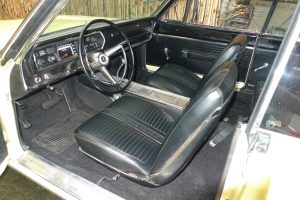 To make sure the GTX had the necessary firepower to back up its performance image, Plymouth equipped it with the 375-horsepower 440 cubic inch V8, which was dubbed as the “Super Commando 440”.  This engine was usually used for Chrysler’s full-size cars but was tuned for more high-rpm performance with a revised camshaft and valve train and free-flowing intake and exhaust systems.  The standard transmission was a three-speed automatic transmission while a four-speed manual transmission was optional and included a larger ring gear, double-breaker distributor, free-wheeling fan and an oil pan windage tray. 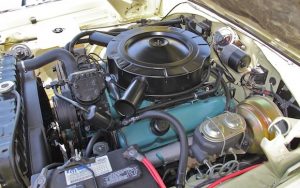 Optional for the GTX was the 425hp 426 Hemi, which only 720 buyers paid an extra $546 in 1967.  For those that wanted even more performance than a Hemi-powered GTX, Plymouth offered a R023 version (standard Belvederes were RH23 and GTXs were RS23) of the Hemi GTX, which was called the “Super Stock” version. Only 55 R023 GTXs were made and they are quite rare today. 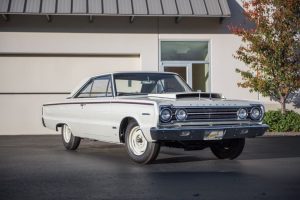 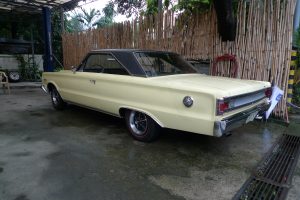